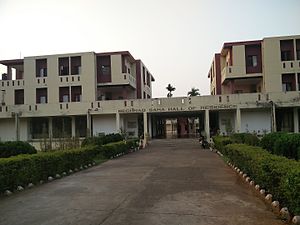 Meghand Saha Hall of Residence, known as MS Hall, was inaugurated by honourable Dr.Murali Manohar Joshi in 2003. Initially meant to be a hall for M.Tech.(PG) students, it was made a B.Tech.(UG) hall within three years of its existence. Named after Meghnad Saha who was an eminent astrophysicist best known for his development of the Saha ionization equation used to describe chemical and physical conditions in stars.

The motto of the Hall is Ubi Concordia Ibi Victoria means "Where there is unity, there is victory".

Within three years of its existence as an undergraduate hall, the boarders of this hall have shown immense talent and all-round performance in all the three General Championshipsnamely Sports & Games, Technology and Social & Cultural. The efforts of this hall to strive for glory resulted in a large number of medals in various events.