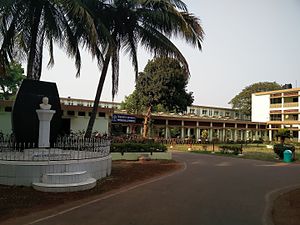 Vidyasagar Hall of residence was conceived in 1960 and named after the great scholar & social activist Pandit Iswar Chandra Vidyasagar. The hall started functioning from, 28th September 1965. From the day of its inception till date, VS has played a significant role in the campus. The VS Hall has experienced the stay of sole M.Tech., PhD’s and B.Tech, thereby having an outstanding contribution to the Institute. Its existence started with a U.G batch, then a mix of U.G & P.G. and then completely Ph.D scholars. Again it went with the U.Gs and for last ten years VS has been a complete P.G hall. One saying that reflects the hearty relationship among VSites is that V (We) that comes before S(Self) in V.S.

The hall has 365 single rooms and two single seated guest rooms. All the rooms are equipped with the necessary furniture and have Internet facility through the Institute LAN. There is an ITC telephone booth, which is kept open for 24 hrs. Other facilities provided in the hall are Library, Common room, Music room, Canteen, Xerox Centre and Stationary shop.