ENCORE selection auditions are held once per year, only for first years, in August for an active membership for all four/five years. The society selects a batch of 30-40 first years (UG) and 5-10 (PG) at the beginning of the academic year soon after the welcome production. Selection procedure consists of tasks that judge voice modulation, intensity, speech and diction, confidence and acting skills.

In rare cases, exceptional and highly enthusiastic people are also inducted into ENCORE who share a similar passion of theater and contribute to the society. Past members who were inducted include Kaustabh Khare. 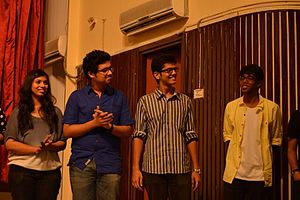 ENCORE has four governors selected by the society seniors every year who govern the society and represent it in the Gymkhana. Overall co-ordination during productions, outstations and competitions are handled by the governors.

Cut by Ed Monk was performed for the welcome production for the year 2015-16.

Within two weeks of the Autumn Semester starting, ENCORE performs its first production of the year. The cast ranges from second years to fifth years. Over the years it has been observed that ENCORE generally picks up comical plays and sketch comedy to entertain the freshers. This is also the first time the Governors for the new tenure are introduced to KGP. 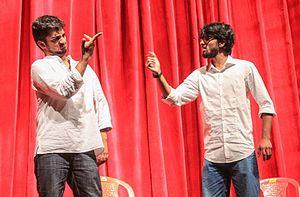 An Impromptu act by Mudit Rustagi and Kartikeya Pradhan for the Welcome Production by Encore in 2013. 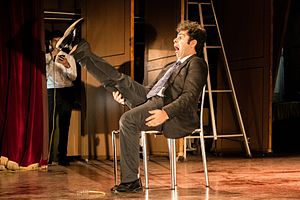 The freshers are given a thorough training of theatre oriented workshops that teaches them the basics of dramatics. Skills like voice modulation, voice intensity, dramatization, body posture, stage movements, third forms, etc are taught in groups. First years along with the four governors train for three weeks at the Vikramshila Foyer (commonly referred to as Baap Ki Jagah by the ENCORE fraternity). Occasional skits, monologues, and challenging impromptu are attempted to improve the versatility of the actor. For tenures in which a PG Batch is also inducted, separate workshops are conducted for them. 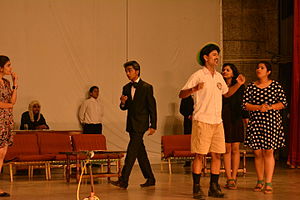 The Governors with the help of the entire society train the first years and with rigorous practice put up a production, with the entire cast being first years. For tenures in which a PG Batch was also inducted, a separate production is done by them.

Nukkad Natak is the only event during the entire year when ENCORE does a play/street play in Hindi. Only the first years take part in the Nukkad Natak competition organized during SpringFest.

The final monologue by Leela Benare played by Abhivyakti Dixit.

ENCORE also participates annually in the Stage Play event of SpringFest i.e. Rangmanch. This is the only time when it prepares two versions of the same play, a teaser trailer, and a full-fledged version.